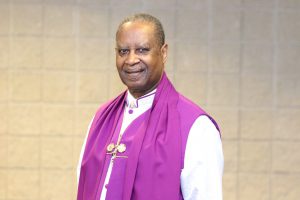 James A. Maye was born October 15, 1942, in Farmville, North Carolina. He is one of three children and the only son born to Sadie and William, now deceased. He committed himself to the Lord, Jesus Christ, while in his youth.

He graduated from H. B. Sugg High School in Farmville in 1961. Maye attended Shaw University on an academic scholarship and earned a Bachelor of Arts in religion with a minor in social studies in 1965.

Maye received a one-year scholarship to Oberlin Graduate School of Theology in Oberlin, Ohio. While at Oberlin, he served as assistant minister of the Wadsworth and Wilson Methodist churches in Cleveland, Ohio. In 1966, he became a chaplain intern at Fulton State Hospital in Fulton, Missouri, and received a certificate in pastoral counseling.

Maye attended Vanderbilt University Divinity School in Nashville, Tennessee, where he earned a Master of Divinity in theology in 1968. While in Nashville, he served as minister of youth at Edgehill Methodist Church.  On June 22, 1974, Maye married the former Florence L. Johnson of Richmond, Virginia.

Maye also has worked as a juvenile probation officer, pastoral counselor, a special education teacher, and a drug abuse counselor.

In 1991, the leader of the Church of Our Lord Jesus Christ (COOLJC) appointed Maye to the Junior Board of Bishops. On August 8, 1996, he was elevated to bishop. Maye was appointed the diocesan bishop for the state of Ohio in 2003. In 2005, he was elected to the Board of Apostles and appointed apostle of region VI. Recently, he was named the Apostle for the Youth of COOLJC and parliamentarian for the Board of Apostles.
He has been instrumental in initiating many innovative programs in Cleveland that focus on leadership training and outreach, ministerial associations, and neighborhood partnerships to meet the needs of his congregation and the surrounding areas. He was the cofounder and administrator of Calvary Center Academy; president of the Cleveland Apostolic Ministerial Fellowship; cofounder of Clergy Organized for Drug Extinction; and vice chair of One Church-One Child, an effort to find adoptive Christian homes for children and teens.

Maye has continued his work in support of church leadership. He established a statewide Leadership Development Conference in 2008, an annual daylong session offering training in various aspects of the ministry. In 2009, he formed a partnership with local social service agencies to create a No Child Left Behind tutoring program for children in grades one to seven.